Since 1968 she has been employed at the Health Center, Split as midwife patronage nurse, caring for maternal health and newborns.

Since 1968 she has been employed at the Health Center, Split as midwife patronage nurse, caring for maternal health and newborns.

During thirty years of work as a community nurse, she visited more than 150,000 homes helping midwives with health advice and medical care and literally saved the lives of thousands of mothers and newborns by a proper and timely diagnosis of serious postpartum conditions.

As early as 1979, she realized that pregnant women needed her education for natural childbirth and started volunteering on that topic (newspaper articles on the work were published in "Slobodna Dalmacija"), but the social situation and attitude towards childbirth at that time were not ripe for this pioneering idea that was left to be realized in the future. 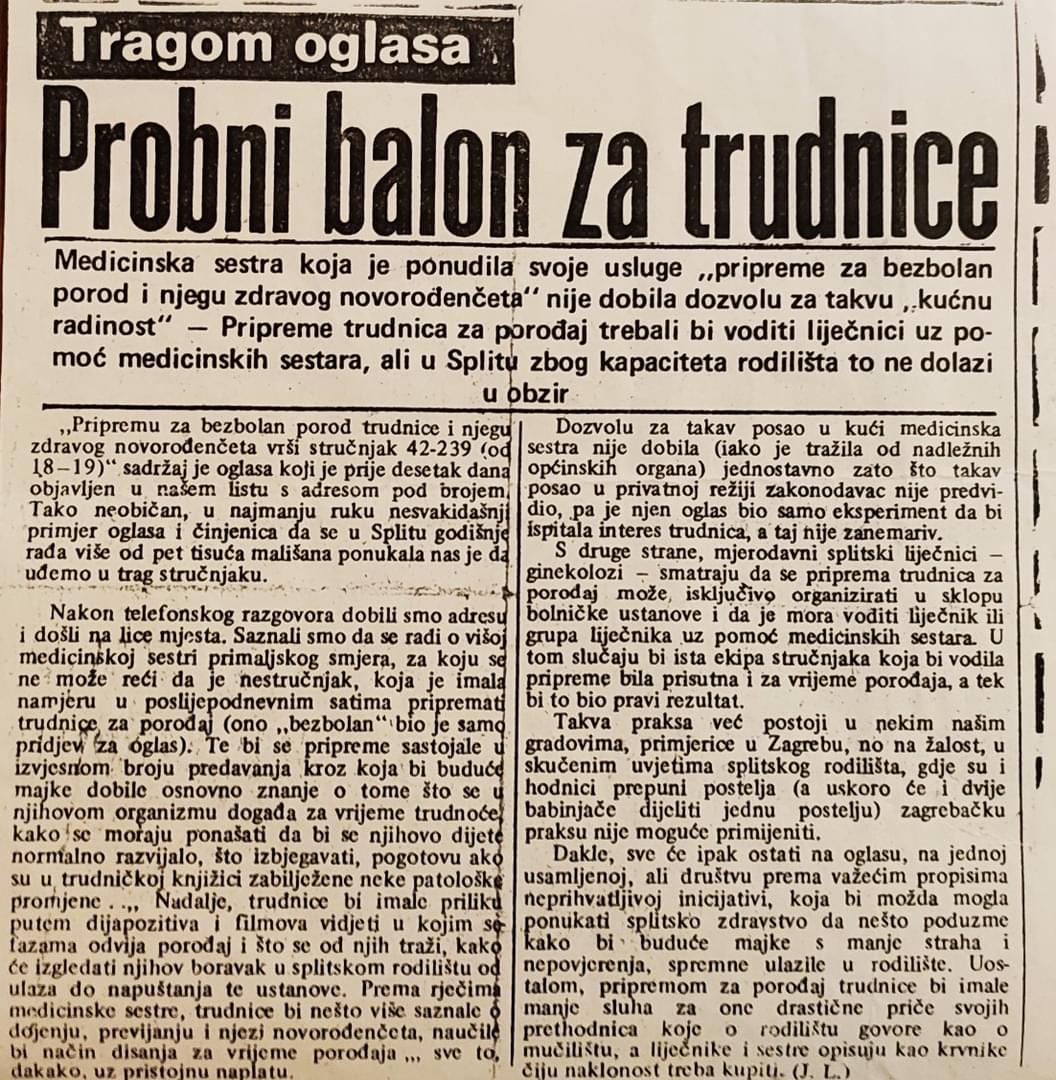 In the first steps, the Association had no sponsors or donors, so Ms. Bosiljka Bulović 22.04.2003. in PBZ raised Mortgage loan on own real estate in the amount of € 20,000.00, and with the same funds has also equipped the premises of the Association.

Since choosing her profession, she has been a lover of her profession - from high school, through studying, life work, to the present day. Therefore, after she retired in 2000 as a third-degree invalid category does not rest, but with her's 10 like-minded friends founded the Association of Pregnant Women Club "Beba Eva" in Split.

At the beginning of 2003, she received space from the City of Split to use where the Association Club of pregnant women "Baby Eva" operates even today. In the same year, she started running the Club of Pregnant Women "Baby Eva" as president, which she still does today.

In 2004, the first major action of the Association was carried out -«Father at birth». At that time, it was in almost all Croatian maternity hospitals allowed fathers to attend the birth, with the exception of Maternity Hospital in Split. As part of a four-month action, it was organized to sign a petition at various locations which resulted in numbering over 50,000 signatures of people from Split and the surrounding area. The problem is repeatedly presented in the media (TV, radio, and the newspaper). The action was a success with the final opening of the doors of Split maternity hospitals and for Split fathers.

In 2006, at the urging of the Association and Mrs. Bosiljke Bulović, through the Deputy Mayor of Trogir, Mr. Vinka Brkana, the city government of Trogir invests in the arrangement of two toilets in Split maternity hospital; two toilets that were several years ago closed by the Sanitary Inspection. Thus, the association gave up the money funds for the benefit of the health of young mothers.

With various projects and actions she implemented, from the beginning in 2006, the Association realized 60 educational and informative TV shows «In the name of life» which on TV-Dalmacija achieves a local audience of 100,000 viewers, and through MAX-TV it also has national cover.

In the same year, the Association launched an initiative «Pregnant Womans day» which works to awaken the public awareness of Croats that pregnant women should be treated with respect and love, while emphasizing that it is a time when a woman goes through mental, physical, emotional, and spiritual changes to adapt to the new life that grows in her.

In May 2007, Ms. Bosiljka Bulović was invited to Zagreb for a meeting with representatives of UNICEF offices in Croatia. On it she discussed solving the problem of breastfeeding in Croatia, because it is UNICEF research showed that in Croatia, by the sixth month age of the baby, only 2% of women breastfeed. Although breastfeeding from the very beginning of labor Club of pregnant women "Baby Eva" was an integral part of the educational course «Preparation for the birth and care of newborns», realizing the seriousness of the situation in our country, Club of pregnant women "Baby Eva" in 19.09.2007. started with the realization of the project "Great School of Breastfeeding". In addition to professional staff, they are in lectures including previous course participants as well«mothers educators».

From 2007 till now in 2021, she continues to work in the Club of Pregnant Women "Baby Eva" with various like-minded volunteers in the health professions and beyond.

We wish that the new trends of Caesarean section to be stopped and that as many happy pregnant women with successful births, healthy children, and successful families pass through ours in Baby Eve.

She points out that since 2019, the World Health Organization has advocated natural childbirth and strictly prohibits any unnecessary interference in childbirth.

During her thirty years as a community nurse, she has visited many homes and, with her health advice and medical care, saved the lives of thousands of mothers and newborns by properly diagnosing serious postpartum conditions. For twenty years she was the head nurse of the Midwifery Patronage of the Health Center in Split, where until 1997 she led eleven midwives.

After retiring in 2000, she founded the "Baby Eva" pregnant women's club. It was this club that opened the doors of the Split maternity hospital to fathers in 2004 as part of the project: "Where were you when it thundered".

At that time, in almost all Croatian maternity hospitals, fathers were allowed to attend the birth, with the only maternity hospital in Split being an exception. As part of the four-month action, the signing of the petition was organized at various locations, which resulted in the number of over 50,000 signatures of people from Split and the surrounding area.

She has dedicated her entire life to teaching pregnant women natural and painless childbirth, believing that it is, although it sounds impossible to many - very possible. In addition to the fact that pregnant women can come to her for individual education, Bosiljka also comes to their addresses, a few years ago she released four very useful DVDs that are a real Bible for all new moms. She estimates that in her career as a midwife in the Pregnant Women 's Club "Baby Eva" prepared over seven thousand women for natural childbirth and cared for over 30 thousand children who were not in "Baby Eva" for education. In her club, fathers are also educated about natural childbirth, breathing, relaxation, breastfeeding, bathing babies, and changing diapers. Expectant parents even get a device that monitors the baby's heartbeat. Once the birth starts, Bosiljka comes to their home and goes to the maternity hospital together. "We wait for the moment when the baby just has to get out, we go to the maternity ward and the baby arrives in 10 minutes, without sewing and cutting. And we are all happy and content".

Because of these major traumas during childbirth, a caesarean section was performed that lasted only 15 minutes. However, through life, incredible consequences are established for both mother and child, as many children born by caesarean section have heart problems. Water remains in the lungs, pediatricians have to aspirate the baby, the first breath has passed and a larger or smaller hole remains in the heart, thus damaging the lungs and heart. Children later in life
more often they have asthma or allergies. In natural childbirth, on the other hand, amniotic fluid is squeezed out of the baby's lungs, the baby comes out, inhales, the heart "closes" and the bloodstream begins to work normally, explains Bosiljka.

She is immensely sad, she admits, because something that is natural is artificially sabotaged.

The big problem is that gynecologists mostly deal with the pathological part of childbirth, and a little with physiology. They are sure of a caesarean section and the point of that story is that the woman and child will stay alive, but no one is responsible for what will happen later.

Childbirth is not going in a good direction because induced births have led to most children being born by caesarean section, babies and mothers later suffer shocks and consequences ... A normal, natural birth should take about ten hours and the final part 3 to 5 hours. We should let the woman do everything herself, nature has taken care of that, and nature is in no hurry, Bosiljka will openly invite moms and dads to educate themselves more about natural
childbirth.

She believes that a caesarean section is justified in a maximum of 20 percent of cases, ie only when the umbilical cord is wrapped around the baby, although, she claims, some of these births could be done naturally but without drips.

Cesarean section is not a natural way of giving birth, it leaves a lot of consequences on both children and mothers. Many babies born in this way have problems with the heart, lungs, various psychological consequences and phobias, neither the child nor the mother are hormonally ready to meet each other, she warns.

That is why her mission is to educate women to overcome the fear of childbirth and realize that the only right path is natural childbirth that does not hurt at all.

In 2007, Ms. Bosiljka Bulović received the Split-Dalmatia County Award for contribution and affirmation of volunteer work.

In 2008, Ms. Bosiljka Bulović entered the shortlist for selection of the City of Split Lifetime Achievement Award Results of all educational courses. The response from pregnant women is excellent, and the feedback from attending courses are an inspiring factor for the continued action of all involved in the work of the Association.